Explained the difference between the AJAX Hub, Hub Plus, and Hub 2.

From now on there are 4 different Hub versions in circulation. The most recent is the Hub 2 Plus.

This has even more memory and possibilities than the previous models.

The differences between all models can be summarized as follows:

View all products in our webshop to buy online.

If you want the best security system in Spain installed by us, choose installation. 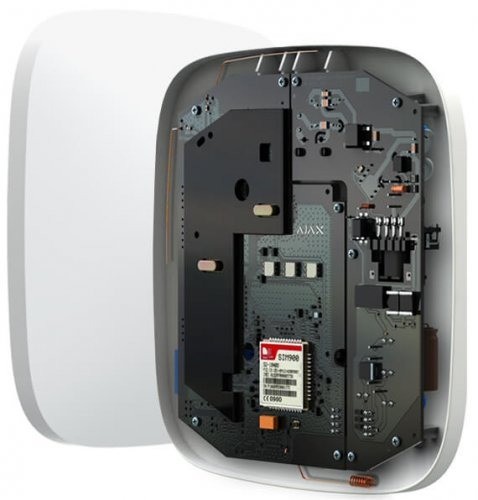 On this page we will tell you the differences between the available Hubs, and why you should choose a particular model.

We describe the improvements that have been made to the different versions of the AJAX Hub, Hub Plus and Hub 2.

Their common feature is the quality of the wireless signal, which makes this wireless alarm system even more advanced than a wired alarm system.

Then we'll discuss the differences between the new technologies integrated in each version.

The AJAX Hub has special features that you won't find in any other brand of alarm system.

These features mainly relate to the type of connectivity they offer and the maximum number of devices they support. This determines in most cases which type of AJAX Hub you should choose.

This way we will talk about which of the 3 power plants is best suited to protect different rooms. Of course this depends on the size of your home and what you want to protect. And it is important to know if you want to use image verification which is possible thanks to the powerful features and applications of the MotionCAM, the motion detector with built-in camera. We'll discuss the possibilities later on.

Finally, we will show you our range of products to customize the Ajax alarm system to meet your needs, depending on the type of property and the security and video surveillance requirements.

Many homeowners who are concerned about the safety of their home and are unaware of the advanced technological innovations of the Ajax alarm approach us with doubts implicit in the phrase: "It is said that the cable is more reliable ...". In these cases, our answer is always clear: With the Ajax system it is no longer necessary to install a wired alarm. This is because AJAX uses the very latest techniques:

For all these reasons, AJAX is the alarm system with a 100% satisfaction of the owners and users.

Features and differences between the available Hub models

One of the most frequently asked questions to our technicians and vendors by those interested in the Ajax alarm is the question that relates to the differences between the three versions of the Hub, the brain of the system: Ajax Hub, Ajax Hub Plus and Ajax Hub 2. We'd like to explain the differences to you, but we also find it important to take into account the common features of the three versions of the Hub.

In other words, the three Hubs of the Ajax alarm:

Thanks to these functionalities, the Ajax alarm system is very reliable, accurate and stable, invulnerable to attacks and attempts at manipulation or sabotage. Take care of your home, office or business and stay in touch anytime, anywhere, so that you are immediately aware of relevant security events.

The improvements and innovations introduced in each new HUB are basically related to expansions in the communication of the system and the types and numbers of devices they support.

While all AJAX Hubs allow an Internet connection via a router Ethernet cable, Hub Plus also has WiFi connectivity. In other words, the only one that can connect to the router via Wi-Fi is the AJAX Hub Plus. But all three can be connected directly to the ADSL or Fiber optic router with a UTP cable (Ethernet cable). They have an RJ45 input on the back.

While all AJAX Hubs allow for the installation of a GSM SIM card (recommended to better protect and defend the entire system), both Hub plus and Hub 2 both have 2 slots for the insertion of 2 SIM cards.

The maximum number of devices, users, rooms and groups also differs depending on the HUB version.

All three Hubs work with Ethernet and 2G SIM cards. The Hub gives priority to the router's Internet, using sim communication in the event of an Ethernet network failure. However, Hub Plus supports 2G and 3G, while the new Hub 2 has the ability to connect 2 SIM cards on 2G. Hub Plus and Hub 2 enhance the reliability of the system in an extraordinary way by enabling communication with different providers. This feature is useful for certain environments where the GSM signal strength of some providers is limited.

On the other hand, Hub Plus is the only one that supports WiFi, so you can connect it to the internet without having to lay a cable to the router. This feature is very useful when it is not possible or cumbersome to lay the network cable to the router. The Hub plus's WiFi connectivity, along with the largest number of users, cameras, devices and groups, increases the ability to protect large areas. Therefore, as we will see, the Hub Plus is very suitable for large installations, whether they are multi-storey buildings, warehouses, business centres or industries.

However, since the end of 2019, Hub 2 has become one of the most popular emergency response centers thanks to the new functionality desired by many users: The ability to capture and transmit burglary images captured by the new MotionCAM detector. Compatible with Hub 2, this camera sends a series of photos when it detects motion. MotionCAM is a motion detector with photographic event recording. It comes with a built-in camera that activates when motion is detected or requested, and takes a picture with a resolution up to 640x480 pixels. The recorded images are clear enough to reach a clear conclusion in any light condition (or lack thereof).

So pay attention: The new MotionCAM camera motion sensor is only compatible with HUB 2.

The rest of the differences relate to the expansion of the capacity in terms of the number of cameras integrated in the App, users, devices and the number of possible groups, which in the case of the AJAX Hub Plus supports up to 25 cameras.

In this way, it is possible to create a starter pack with a Hub 2 and a FireProtect Plus detector, which in addition to detecting smoke and rapid temperature rise, also triggers an alarm when carbon monoxide is detected.

The added "Plus" of the detector is due to additional features of the device, in this example the sensitivity to carbon monoxide, and therefore not to compatibility with any of the Hubs.

The answer is always the same: NO. The explanation is that no camera integrated in the AJAX App can trigger the alarm or generate a system warning. Even if the camera has a motion detector, even if it has an integrated motion detector or PIR.

This is because the AJAX alarm and the compatible cameras belong to different systems. Cameras can be added to the AJAX App to view images from the application, but they can't produce burglar alarms because they are not AJAX Products. In other words, they cannot replace any AJAX alarm detector or sensor.

This means that cameras with motion detectors such as Energiz or Safire Besalu send their own notification to the manufacturer's Application, but not to the AJAX App, so the alarm system only reports a burglary when one of its devices detects a foreign person with one of its sensors or detectors. The function of AJAX compatible cameras is to create video summaries in the event of an intrusion, no more, no less. In other words, they allow you to exclude or confirm security incidents from the AJAX application yourself.

The compatible cameras of now 4 brands can be viewed in the AJAX App when integrated with one of the three versions of the Hub. More information about this can be found on the surveillance camera page.

The AJAX product that is able to detect burglary, activate the alarm system and capture photos of security events is the AJAX MotionCam camera detector. Therefore, it is very wise to have this motion detector that sends a series of photos to the AJAX Application of your mobile phone when it detects an intrusion.

However, the MotionCAM is only compatible with the AJAX Hub 2, which can even transmit these visual attachments (photos) in 2G.

We have already seen that the 3 models of the Hub are connected to the router and have at least one slot for inserting a 2G SIM card. The Hub 2 has a double slot for 2 pieces of 2G SIM cards. The AJAX Hub Plus has WiFi, the standard slot for 2G and also supports a 3G SIM card.

As soon as one of the available communication channels fails, another one takes over. This increased connectivity can in some cases favour the suitability of a certain Hub. It certainly makes it clear that this system always gives a higher reliability than old-fashioned wired systems.

For most small and medium sized homes or business premises, even on 2 floors, it is roughly sufficient to choose a starter package with the standard Hub. In other words, for apartments, single-family homes or offices, the basic Hub is the most recommended Hub.

However, if the internet is not available via cable or fiber optics, if there are disruptions in GSM coverage or if it is difficult to extend the network cable to where you want or need to place the AJAX Hub, then it is advisable to opt for Hub Plus. Thanks to the WiFi reception, this Hub Plus can be installed at all locations where a working WiFi signal is available.

In other words, the AJAX Hub, which supports up to 100 devices, up to 50 users and allows 10 surveillance cameras to be connected to video surveillance intrusion warnings, is usually suitable for medium sized homes or businesses.

AJAX Hub Plus, on the other hand, is designed for large objects or multi-storey buildings. In general, it is recommended for business centers, warehouses or residential complexes that require a larger number of sensors or detectors (up to 150), up to 50 cameras and/or a larger number of users (up to 99).

Even if it is not possible to place the network cable from the Hub to the router, it can be interesting to use the Hub Plus Wi-Fi, which simplifies installation and solves cable extension issues in harsh environments.  On the other hand, Hub Plus is equipped with a GSM module with two SIM card slots for 2G and 3G networks, so that you can use SIM cards from different providers to avoid the risk of communication interference. If one of the two providers is unreachable, the other one is automatically activated.

The wireless Jeweller signal (more info) can spread up to 2,000 meters in open field. Very thick walls naturally reduce the range. Therefore it may be advisable for large companies to install the AJAX Hub and the AJAX Range eXtender signal amplifier (ReX). This will increase the wireless range by a further 1,800 metres in all directions.

Let's say this Hub 2 is more advanced, thanks to the new WINGS protocol developed by Ajax for parallel transmission of visual data.

Hub 2 is the only Ajax Hub to support the new MotionCAM with integrated camera for sending photos. It also improves the capacity of the cameras from 10 (base Hub) to 25 in this Hub 2.

Start by putting together your own alarm system

Now that you know exactly what the differences are between the available Hubs, you can start by putting together the system that is most suitable for you. Every home or business is different, so you decide how many detectors or other products you need.

If you would like help putting together your own starter kit, you can contact us or use our handy starter kit configurator.

View all products in our webshop to install an alarm system yourself.

If you want the best security system in Spain installed by us, choose installation.